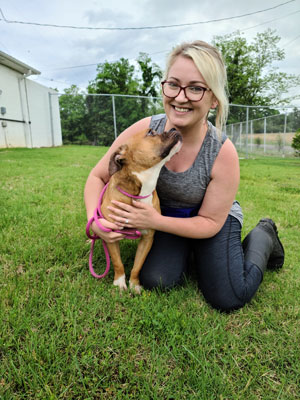 The Lauderdale County Animal Shelter can always use more donations, volunteers and resources.

That’s why Patricia Moore started the group, Friends of Lauderdale County Animal Shelter, last July. The goal is “to bridge the gap between the shelter’s purpose and what’s best for the animals,” Moore said.

“I love animals, but I had no idea how to rescue them. I considered myself a citizen asking for help.”

When she first formed the group, the COVID-19 pandemic was in full swing; potential pet owners had to make an appointment at the animal shelter to see the animals. Adoptions were down, but the number of dogs and cats living at the shelter kept the place full and busy,

Moore said. “It takes a village,” she said. “Animal shelter employees stay so busy — feeding, watering and keeping up with the number of animals they have. Space and resources are always an issue.”

With space for 60 dogs, the animal shelter often finds itself close to being at capacity. For example, in the first four months of 2021, about 300 dogs arrived at the animal shelter, said Terry Kissell Sr., the shelter’s director.

Both Kissell, who started in his job as director October 1, and Moore say they are learning as they go and have discovered the advantage of working with animal rescue groups, many of which are out of state.

Kissell and his staff are working to change the negative image some have of the animal shelter, which is now basically a “no-kill” shelter. His goal for the shelter is to have more animals rescued, to keep the shelter population down, to have the resources to spay and neuter animals, and to develop a vetting process of potential new owners before they can adopt.

“I changed my focus from getting the dogs adopted to working with rescue groups,” Kissell said. “Most of our animals are taken up north where states have stricter laws. When you adopt a pet, you have to take care of it. Tennessee law requires that pets adopted from a shelter must be spayed or neutered, but at this time, we have no way to follow up. Once we can do that, we’ll push adoptions more.”

Donations to the Friends of the animal shelter help pay for vaccinations, worming, medications and cleaning supplies, Moore said. Volunteers help keep the shelter clean, work with the animals and network with the rescue groups. Moore often spends hours on the phone each day to connect with rescue groups. She uses the group’s Facebook page to raise funds when the shelter has a need. She also posts pictures of animals who need homes.

“They are a lot of help,” Kissell said of the group. He appreciates the help he gets from Moore’s group, and Moore admires the hard work of the shelter’s staff. “They’re great,” she said, “their hearts are in it.”

One big challenge for both the Friends and the animal shelter is educating the public about the need to spay and neuter their pets and take other measures to keep their pets healthy and safe.

“It’s cool to watch the animal rescue volunteer movement grow in Lauderdale County, neighboring counties and other states,” said Moore, who grew up in Ripley and has two children.

The number of pets needing homes is sad, Moore said. But, she added, “we have more happy days than sad days. A happy day is when a large group of animals leave with a rescue group for new homes. Or, it’s just a day when a lot of volunteers show up.”

Source: American Society for the Prevention of Cruelty to Animals

Those wanting to adopt a pet from the animal shelter should call the shelter at 731-836 7387 to make an appointment. The shelter, located at 3265 Curve Nankipoo Road, is open 8 a.m. to noon Tuesday through Saturday.

The current adoption fee is $35 for adult dogs, $25 for puppies and $10 for cats. The new pet owner also receives a half-off voucher to get the animal spayed or neutered at vet clinics in Ripley and Alamo.

Volunteers should contact Moore by email at friendsoflcas1@gmail.com or through the Friends of Lauderdale County Animal Shelter Facebook page.

Donations can be sent to Friends of the Lauderdale County Animal Shelter at the Bank of Ripley where the group has an account. Moore is in the process of making the Friends group a nonprofit 501(c)(3) corporation.