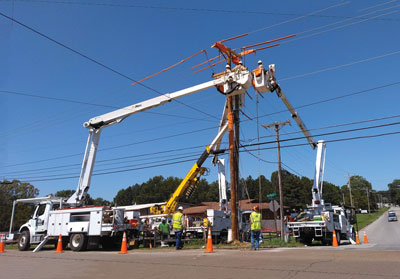 The company earned first place in the category for utilities with 30,000 to 59,999 worker-hours of annual worker exposure. Ripley Power and Light’s award is based on 28 employees who work directly with the company’s electrical lines and equipment having 58,240 total electrical worker-hours of exposure.

“Ripley Power and Light is proud of its safety record,” said Mike Allmand, President and CEO. “This award is a testament to the hard work that goes into ensuring that our team members go home safe to their families every day.”

More than 335 utilities entered the annual Safety Awards, which is the highest number of entrants in the history of the program. Entrants were placed in categories according to their number of worker hours and ranked based on the most incident-free records during 2019.

The incidence rate, used to judge entries, is based on the number of work-related reportable injuries or illnesses and the number of worker-hours during 2019, as defined by the Occupational Safety and Health Administration (OSHA).

“Strong safety programs are essential to ensuring that electric utility employees are informed and trained on safe work procedures,” said Brandon Wylie, Chair of the Association’s Safety Committee and Director of Training & Safety at Electric Cities of Georgia. “The utilities receiving this award have proven that protecting the safety of their employees is a top priority.”

The Safety Awards have been held annually for the last 60 years. The American Public Power Association is the voice of not-for-profit, community-owned utilities that power 2,000 towns and cities nationwide.