'It could have been worse'

The ice certainly was beautiful. It glistened on tree branches in Lauderdale County, West Tennessee and a wide swath of the United States up to the East Coast. 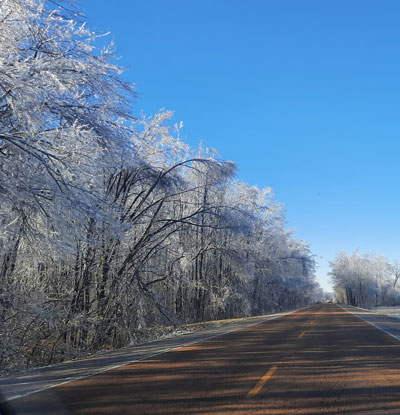 Beauty was not a priority, though, for customers who lost electric power when the tree branches burdened with ice started falling on power lines.

In Ripley Power and Light’s service territory, the calls and text messages to its Outage Management System started coming in about 3 p.m. Thursday, February 3, said Chris Mooney, the utility’s engineer. Although Ripley Power and Light offices were closed that day because of treacherous roads, line crews were already at work, anticipating the weather would cause power outages, he said.

Crews spent the rest of the evening restoring power in scattered areas across Ripley’s service territory. Several outages occurred the next morning, too. Calls and texts from customers who had updated phone numbers in the Outage Management System allowed the system to immediately inform line crews where they were needed.

“We restored power quickly to most customers,” Mooney said. “Some customers had to wait longer if they had to call an electrician first to repair a meter or meter base, such as attaching it back on their home.”