Enter – If You Dare 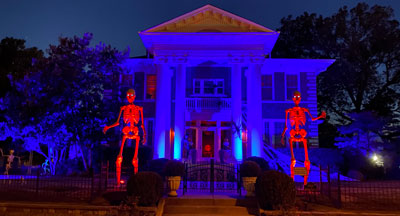 Huge skeletons at the front gate. Giant spiders crawling over the front porch. Tombstones. A huge skull at the front door. Eerie blue lights and lots of fog.

Enter the domain of the 100-year-old Barbee Mansion at 162 S. Main St. in Ripley – if you dare. Quickly walk past the ghostly creatures. Don’t get caught in the spider webs. Refuse to see if it’s your name on one of the tombstones.

Your treat – unless you plan a few tricks yourself – is a greeting from Chad and Rachael Lowry, the human denizens of the historic home.

Most people celebrate Halloween with some decorations, candy or maybe a small party. The Lowrys, however, have taken Halloween to a new level. 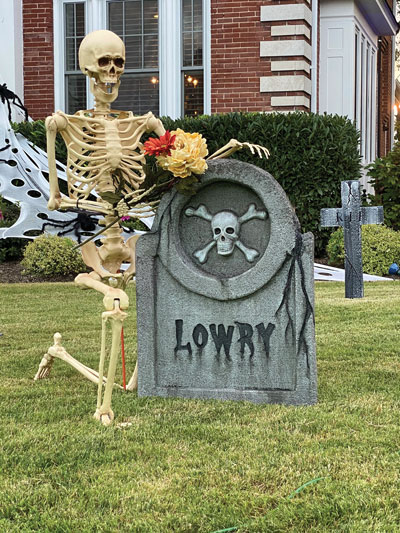 Built in 1908, the Barbee Mansion provides the perfect setting for Halloween. The Lowrys were living in Drummonds when they saw the mansion for sale on the Zillow website. They bought it the first time they walked through the home. As a part of the purchase, they kept the Barbee Mansion Facebook page: www.facebook.com/barbeemansion.

Each year, starting on the first of October, Chad and Rachael decorate the entire house, inside and out. Their two grown sons no longer participate, but this year they have enlisted the help of their two nephews, Noah and Nicholas Lowry, who live nearby in Burlison, Tenn.

Though it isn’t easy finding the large decorations for sale, Chad adds to his Halloween display each year. He purchased a giant spider and a giant pumpkin head this year on Home Depot’s website at 2 a.m. one morning.

“You can hardly get them,” he said. “They are gone within minutes. I just happened to check and sure enough found them; Home Depot has the absolute best Halloween decorations every year.”

His wife puts a foot down on having coffins in the yard, Chad said, “but you never know.”

Blue lights and fog machines add to the effect outside. After reading that blue lights make everything look eerie, Chad said he spent just $10 on two blue lightbulbs, one of the best aspects of the display. 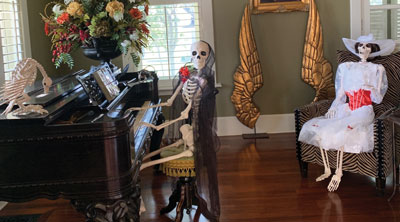 Chad also calls himself “a big Costco guy.” That’s where he buys the full-size candy bars to give away to trick-or-treaters.

Last year, 500 children showed up. Because the Lowry house is located right off the Ripley Court Square, many families came from Ripley’s Trunk or Treat event. People who drive can park across the street on the Methodist Church parking lot, Chad said. Police will be on hand to direct traffic.

This year, Chad and Rachael will open their doors at 5:30 p.m. on the night Ripley celebrates Halloween. They stop handing candy out when people stop coming to their door.

Mysteriously, all of the decorations will be gone and stored under the house by noon the next day.

“We are the legend of Halloween,” Chad said. “We have always loved Halloween. We like interacting with the kids. It’s a great time.”