Restored Gas Station in Gates Takes You Back to the 1950s

Just past the only red light in Gates, on Second Street, sits a restored gas station that takes visitors back in time. 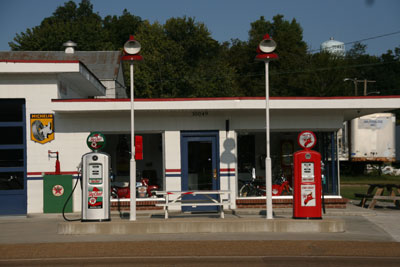 John Hutcherson, owner of the station, has made it his mission to restore the building to its former glory and make it something everyone can enjoy.

The filling station is a time capsule of relics and memorabilia from decades past. John notes many of the items are local to the area and were bought within a 75-mile radius of Gates.

The walls and shelves are lined with a variety of items, including Tonka trucks, spark plugs, a toy Elvis Presley guitar and 1929 to 1930 annuals from Halls, Tennessee.

John houses several restored vehicles in the station, including a 1969 Rallysport Supersport Chevrolet Camaro, a 1971 Honda 175 motorcycle and a 1935 Chevrolet pickup.

John enjoys talking about the details of his station — everything inside and out — because it was a big part of his childhood.

Born in 1956, John and his family lived in the Dry Hill community until their home burned down in 1964. They then moved to the Concord community.

It was then John began to form a connection with the service station. He would ride his bicycle there to hang out with his friends. They loved seeing the cool cars that would drive by, stop to fill up with gas or were worked on.

He says his favorite part about owning the station is remembering the times he was able to be there as a kid.

“That’s what provokes me to have the cars I have and to have this memorabilia and stuff,” John said. “It’s just something that’s always intrigued me. I’ve just always wanted to have my hands on it, and when I see it, I still get excited.”

Just about everything in the station has a story—even a blue toy Mustang sitting on top of a wooden display case. When John was a boy, he bought the car for $8.50 with money he had earned chopping cotton. After he took it home, he was disappointed because it didn’t run as fast as he thought a Mustang should. His mom told him to take it back. He did so reluctantly. 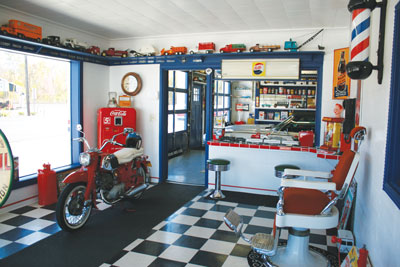 James Jones, the store owner, gave the car to his son, Jimmy. Several years ago, Jimmy gave John a bunch of stuff from his attic. It included the toy Mustang.

John knew there was something odd about it, but he didn’t remember it originally had been his until he started to clean it up.

“When I opened it up, this unique feature about it brought all that back to me,” John said. “The bulbs right here shine light into these glass tubes, which light the headlights and taillights up. When I saw that, I remembered it all. The conversation came back — me standing there feeling guilty about carrying something back.”

Restoring the station is John's hobby, and he continues to add to it, buying items that interest him. He enjoys spending his free time there, cleaning his car or rearranging his displays.

“It’s just a place I come to hang out, and it’s where I can put my stuff, and people can see it,” John said. “Some of my buddies came down and call it ‘Gates, America.’ They made me a sign to put on the pole over here.”

But John isn’t stopping with the service station. Recently, he hauled in a building on an 18-wheeler and put it just past the service station. He is renovating it to give it a country store look. His goal is to create a little village, displaying items he has collected and to give the community something to enjoy.

“It’s funny how you live in a small community, and you don’t see a lot of people you went to school with,” John said. “But since I’ve had this, a lot of them have stopped by.

"I’m not trying to run any type of business down here. I’ve just got this so I can enjoy it myself and my friends can enjoy it.”