The Lauderdale County Enterprise has been publishing news about the Ripley area for more than 135 years – documenting local history and serving readers throughout the community. 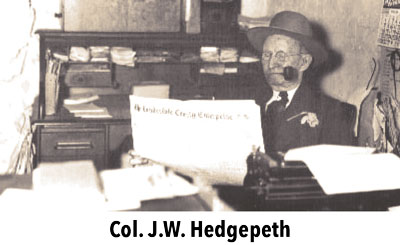 In fact, it is the oldest business in the county. “Even with two fires and a flood, the Enterprise never missed an issue,” said Beverly Hutcherson, a long-time employee who recently purchased the weekly newspaper with her husband, Mike.

The first fire destroyed the newspaper’s building; the second fire destroyed customer records, she said. The fires occurred earlier in the newspaper’s history, but Hutcherson remembers the flood well; a water line broke on the second floor in 2016, flooding the first.
She remembers gathering up cords and equipment so they wouldn’t get wet and putting out the paper with her feet propped up on a box above ankle deep water.

The newspaper’s own story begins in 1885 when L.A. Palmer launched a weekly called The Ripley Enterprise. Charles Campbell and Col. J.W. Hedgepeth purchased the newspaper in 1893 and changed the name to The Lauderdale County Enterprise.

The two men set about to give the community the best paper possible and publish “all the news that’s fit to print.” They also established on the masthead the motto: “Seek to Build Up, Not to Destroy.”

Campbell died in 1943 and left his interest in the newspaper to his son, John, who sold it to B.C. Durham Jr. During that year, Hedgepeth wrote an editorial that appeared in the Enterprise reflecting on his 50 years of ownership.

“It can be truly said that none realizes more fully how swiftly time passes than he who, week by week, month by month, and year by year, moves up the dates which record the transition from the icy winds of winter to the balmy breezes of spring, the fullness of summer, and the ripening beauties of autumn … That our efforts have been rewarded with a reasonable measure of success, is reflected in the long tenure of service we have given the public.”

Six years later, Hedgepeth retired and sold his share to William A. Klutts, who bought Durham’s half in 1965.

In 1969, construction began on the newspaper’s current location on Jackson Avenue. Klutts designed the building for newspaper publishing, Hutcherson said. The newspaper had been using a building on the east side of the square.

Klutts, who owned the paper until he died in 2013, left it to his business partner, Executive Editor Terry R. Ford. Ford died in 2016 and left it to his twin sister, Brenda J. Moore. She assured readers that the newspaper would carry on with the same integrity and belief as before.

When Moore died in 2018, her daughter, Sue Ann Cloar, inherited the newspaper. Cloar sold the newspaper to the Hutchersons, effective Oct. 1, 2020.

Today, the Lauderdale County Enterprise prints and distributes 4,600 copies each week through subscription and single copy sales. Gone are the hot type for printing, the old letter presses, pasting up pages and writing stories on typewriters. Each Tuesday, the final stories, ads and page layouts are done on computer. The paper is sent digitally to Union City where it is printed.

The paper went from typewriters to digital in 2008, Hutcherson said. She and other staff members had to learn the new process in two weeks. She remembers that Klutts, the editor, did not want to give up his typewriter.

Hutcherson worked at the paper setting type when she was young. She left to raise her family, but returned when her two children were nearly grown about 25 years ago. 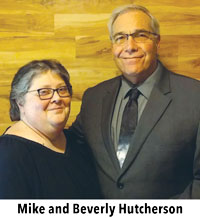 Since then, she’s done about every job at the Enterprise: interviewing and writing stories, typing, paste up, selling and creating ads, dealing with customers, layout. “You name it; I’ve done it,” she said.

It has always been her dream job. “Ever since high school, I dreamed of being published,” Hutcherson said. “I’m living the dream; I get published every week.”

She learned from the best, she said, when Klutts and Terry Ford were her bosses.

She still goes by the motto of the early owners – Campbell and Hedgepeth – to build up and not destroy.

She’s tickled, she said, to be the owner, to carry on the paper’s role in the community. “I love it. I really love it. It’s my baby.”