Lauderdale County has a part in a TV movie

The isolated, former Ashport schoolhouse in west Lauderdale County is playing a role in an ABC-TV miniseries coming out later this year.

The film crew turned the schoolhouse into a grocery store in Money, Mississippi, a community where 14-year-old Emmett Till, a black teenager, was murdered in 1955. The crews created other store fronts next to the two-story, brick school building, including an old filling station.

Till’s murder, his mother’s decision to have an open casket and media coverage of the funeral in Chicago was a catalyzing event in the Civil Rights movement. The film, in fact, is about Mamie Till-Mobley who worked hard to keep what happened to her son in the news. The miniseries is called “Women of the Movement.”

Though the old Ashport School has only a small role in the film, the activity of building the set and filming created a lot of interest in an area of the county that is easily forgotten.

The school building is all that remains of several small communities along the banks of the Mississippi River. They had names like Gold Dust, Fulton and Ashport. Each was self contained with its own schools and grocery stores because they were so isolated, explained Billie Morris, Lauderdale County historian.

In fact, she said, it was often easier to cross the Mississippi by boat to Arkansas to shop than to travel the long road to Ripley. To get to the area from Ripley, turn west on U.S. 19 where it intersects U.S. 51. Then drive west to the Mississippi River.

The area, settled around 1838, was some of Tennessee’s richest farmland, fed by nutrients when the Mississippi backwaters rose across the land and then receded. In fact, the area started caving into the river in the early 1840s, and it wasn’t long that the originally cleared land ended up in the river. 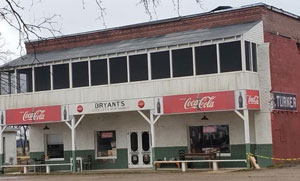 In one of her books, Morris says that Ashport was founded by John W. Campbell, Joseph Jones, General William Conner and Matthew Pickett. They jointly owned 5,000 acres of land. Two hundred of those acres were laid off in lots and sold in 1838.

One story about the Conner family is that a river boat, the Robert E. Lee, docked on the family’s land and served refreshments during a lavish wedding celebration at their home. The wedding couple then boarded the boat for a trip to St. Louis, a gift from the Robert E. Lee’s owners.

Jim Fullen, another well-known resident of the area, opened a grocery store in the river bottoms in 1928 when he was 21 years old. As land continued to cave into the river, the store was threatened, so Fullen moved it to Ashport in 1950. He built a gin and was the town’s postmaster. The post office was in his store for more than 30 years; the zip code was 38001.

After Fullen died in 1989, the store building eventually became headquarters for Fullen Farms.

Houses and other buildings were built on stilts because of the frequent flooding. But the area continued to cave into the river and the backwaters continued to flood, wiping out barns, homes and other structures as the years went on. Soon the area was littered with abandoned buildings as people decided to stop fighting the water and moved away.

A big flood in 2011 washed away most every building that was left, except for the Ashport School, which was built in 1949. The school had closed in 1967, and for a few years, the building came alive as a honky-tonk.

Today, the land is still farmed for cotton, soybeans and other crops. The towns may be gone, but you can still see crops growing for miles in every direction on some of the richest farmland in Tennessee. 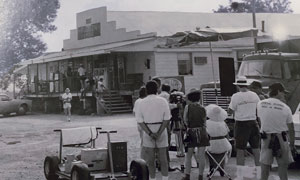 It was a setting in another movie, released in 1989 as “Black Water” and renamed “Tennessee Waltz.” The thriller, directed by Nicolas Gessner, starred Julian Sands, Stacey Dash and Ed Lauter.

It’s a story about a British lawyer, who is on an innocent fishing trip in the Tennessee wilderness and gets entangled in a murderous web. His first mistake is a torrid encounter with a woman who ends up dead.

When he is stalked, he turns to the law for help only to find himself arrested.